More than 200 employees have been barred from work in Georgia’s largest school district. A high school in Indiana had to shift to online learning after just two days. And students in Mississippi were forced to quarantine after classmates tested positive for the coronavirus during the first week of classes.

The new academic year is off to a chaotic start as schools open in some parts of the country while infections continue to rage. Already in the South and the Midwest, students and teachers have brought the virus to school with them, triggering quarantines, delayed openings and temporary shutdowns as positive tests roll in.

With the first schools open barely a week, one question is quickly arising: How many positive cases should it take to close down again?

It is a question to which education leaders have received vague, sometimes conflicting answers from state and local officials, with widely varying standards in different parts of the country.

In New York City, two cases in unrelated classrooms would be enough to trigger a temporary closure of an entire school, which could be extended for two weeks. But California’s rules say its schools should shut down if 5 percent of the staff and students test positive, which in large schools could mean scores of cases. Mississippi guidelines say that schools “may consider dismissal” if at least three classrooms have simultaneous outbreaks.

Federal recommendations also leave the decisions largely up to schools, saying that “a single case of Covid-19 in a school would not likely warrant closing the entire school.”

The uncertainty means that superintendents and other administrators are being asked to make decisions for which they are often ill-equipped, said Noelle Ellerson Ng, an associate executive director at AASA, the School Superintendents Association.

“Do districts know enough? They don’t,” she said, adding, “They’re not experts on pandemics.”

The rash of positive cases during the first week of school foreshadows a stop-and-start year in which students and staff members may have to bounce between instruction in the classroom and remotely at home because of infections and quarantines.

Many of the nation’s largest school districts have already announced that they will begin the school year with remote learning because infections in their communities are too widespread. That includes Los Angeles, the nation’s second-largest district, which reached a deal on Monday with the local teachers’ union that would establish a remote learning schedule that resembles a typical school day more closely than home instruction did in the spring.

In Maryland, Gov. Larry Hogan issued an emergency order counteracting Montgomery County’s health department, which said on Friday that all private schools needed to start the year remotely, just as public schools in the region were planning.

Montgomery County is home to some of the nation’s most prestigious private schools, including St. Andrew’s Episcopal School, attended by President Trump’s youngest child. Mr. Hogan, a Republican, said the county’s closure order was overly broad and “inconsistent with the powers intended to be delegated to the county health officer.”

Mr. Trump, who has pressured schools to reopen and threatened to withhold federal funding from those that do not teach in person, renewed his call on Monday, tweeting first “Open the Schools!” and later “OPEN THE SCHOOLS!!!”

But some public health experts doubt that schools that open classrooms in hard-hit parts of the country will be able to avoid shutdowns for long.

“It’s simply not possible,” said Dr. Peter Hotez, dean for the National School of Tropical Medicine at Baylor College of Medicine in Houston, adding that “there’s just too much virus transmission” across a significant portion of the United States, particularly the Sun Belt, for schools there to avoid major outbreaks.

The Risk That Students Could Arrive at School With the Coronavirus
New estimates show that large parts of the country would likely see infected students if classrooms opened now.
July 31, 2020 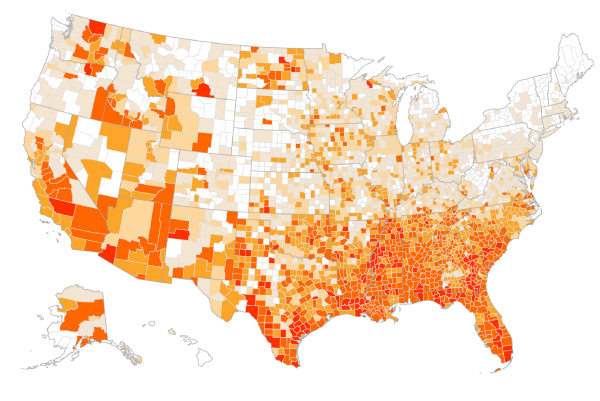 While school will not start in some parts of the country for several weeks, about 14 percent of American children typically go back by the first full week of August, mostly in the South and parts of the Midwest.

It took no time at all for the virus to appear in hallways and classrooms after schools started in Indiana on Thursday. At Greenfield Central Junior High School, outside Indianapolis, a student received a positive test on the very first day of classes, and students who had been in close contact were told to quarantine for 14 days.

In Elwood, Ind., a community of about 8,000 in the central part of the state, the superintendent of the Elwood Community School Corporation sent out a note on Saturday thanking students and parents for “a great first two days of school!” But the optimistic tone quickly gave way: Several staff members had tested positive for the virus, he wrote, and one employee at the high school had potentially exposed other staff members.

Students in seventh through 12th grades are now spending this week learning online. Officials plan to return to in-classroom learning as soon as next week.

That is the right response, according to Dr. Troy Abbott, president of the Board of Health for Madison County, which includes much of Elwood. Without state requirements, he said, the county has been recommending that schools stay open unless they exceed an average of 24 cases per day over a seven-day period.

“We don’t have a vaccine, and I don’t know that we should wait around for a vaccine,” Dr. Abbott said, citing recommendations from the American Academy of Pediatrics that it is important for children to be physically present in school. He also noted that younger people are less likely to get seriously sick from the coronavirus.

“Our hospitals are not overworked, they are not overwhelmed, we have not been busy for over a month, and getting kids back to school is a very reasonable option,” he said.

But some public health experts are skeptical that it is safe to reopen schools in areas where the virus is spreading widely, or where local officials do not have the means to test and trace people quickly.

Even if children are less likely to get seriously sick, “every child that I know lives in a home with an adult,” said Dr. Harry Heiman, a clinical associate professor of health policy and behavioral sciences at Georgia State University. “The idea that you can safely reopen schools and not in fact worsen spread is not based on science,” he added. “It’s based on wishful thinking.”

In some cases, the virus has arrived in schools even before the students.

In Gwinnett County, Ga., the largest school system in the state, teachers returned to work on Wednesday in preparation for starting classes remotely on Aug. 12. But as of Thursday, about 260 employees had been excluded from work because they tested positive or had potentially been exposed to the virus.

Sloan Roach, a spokeswoman for the school district, said a majority of cases had been attributed to community spread. “We have people who have called in to report who have not been at school or work,” she said, adding that positive cases were to be expected.

Gwinnett County has seen about 4,000 new infections confirmed within the last two weeks.

About 55 miles away, a district in Pickens County, Ga., faced a similar problem after staff members who gathered for training at an elementary school showed coronavirus symptoms. The district, which serves about 4,400 students, delayed the start of school for two weeks so all of that school’s employees could get tested.

“We are just being overcautious,” the superintendent, Rick Townsend, said on Monday, which was supposed to be the first day of school. He said he made the decision to delay classes until Aug. 17 in consultation with local health officials.

At Corinth High School in northern Mississippi, students are filing into classrooms according to seating charts to limit their contacts with others. They eat breakfast and lunch at their desks. English and math classes are taught in big open spaces, like the cafeteria.

Still, at least three students have tested positive for the virus since school started last week, and about 40 are in quarantine.

“I’ve been in the business over 40 years — I have never experienced anything like this,” said Lee Childress, the district’s superintendent. “It’s kind of like drinking out of a fire hose because it’s happening so fast.”

Still, after a summer of preparation, he said he felt comfortable proceeding with the regular start date.

“It doesn’t matter if you open schools in July, August, September or October,” he said. “It’s something that every school is going to have to address.”