WASHINGTON — Dr. Anthony S. Fauci told Congress on Tuesday that he was seeing a “disturbing surge” of infections in some parts of the country, as Americans ignore social distancing guidelines and states reopen without adequate plans for testing and tracing the contacts of those who get sick.

Dr. Fauci’s assessment, delivered during a lengthy hearing before the House Energy and Commerce Committee, painted a much grimmer picture of the coronavirus threat than the one given by President Trump, who claimed last week that the virus that had infected more than two million Americans and killed more than 120,000 would just “fade away.”

“The virus is not going to disappear,” said Dr. Fauci, the nation’s top infectious disease expert, who testified that the virus was not yet under control in the United States.

Coronavirus in the U.S.: Latest Map and Case Count 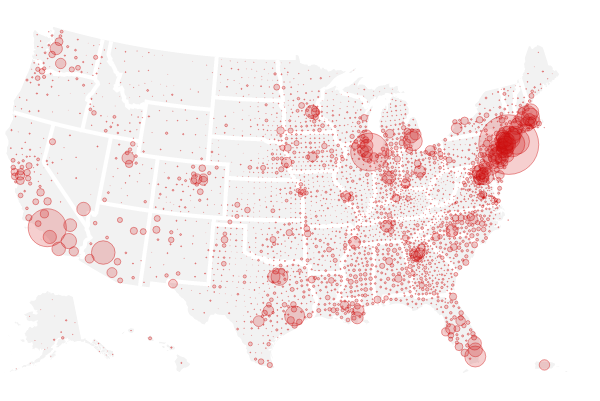 His testimony came as more than half of the country was seeing an uptick in cases, with officials in some states slowing their return-to-work plans or even imposing new restrictions. Dr. Fauci and three other leaders of the government’s coronavirus response who testified on Tuesday cast a cloud over the sunny accounts offered by the president as he has portrayed the United States as a nation bouncing back from the brink.

“I am very cautious and I don’t — still don’t sleep well at night,” said Adm. Brent P. Giroir, the assistant secretary for public health, “because we have a long way to go.”

More than three months after Mr. Trump declared an emergency because of the virus, Dr. Fauci said the picture was a “mixed bag,” with some bright spots, but also some dark ones and many unknowns. Some states like New York are “doing very well” in controlling the spread of the virus, but the surge in other states is “very troublesome to me,” he said.

“The next couple of weeks are going to be critical in our ability to address those surges that we are seeing in Florida, in Texas, in Arizona and other states,” Dr. Fauci added.

Both he and Dr. Robert R. Redfield, the director of the Centers for Disease Control and Prevention, warned of a dangerous situation looming this winter, when the regular flu season will intersect with the coronavirus, producing what Dr. Fauci described as “two respiratory-borne infections simultaneously confounding each other.”

The hearing came as the nation was still facing steep challenges in dealing with the virus. There is not nearly enough testing, and the United States lacks sufficient contact tracers to track down and isolate those who have come into contact with infected people — a critical step in controlling the virus’s spread, the experts agreed. Admiral Giroir conceded that even the 500,000 tests the country was conducting daily were insufficient. And Dr. Redfield said that the country had 28,000 contract tracers, a fraction of the 100,000 he had previously said it would need.

A coronavirus vaccine will not be ready until at least the end of this year or early 2021, Dr. Fauci said, reiterating the timetable he has given in the past. He said he was “cautiously optimistic” about meeting it.

He also pledged to lawmakers that he would not allow any vaccine to go to market until it was proved both safe and effective. And even then, there may be different vaccines for different populations, and some may require booster shots.

In the meantime, the witnesses said it was imperative for the nation to stock up on masks and other supplies.

The wide-ranging hearing, which also featured Dr. Stephen Hahn, the commissioner of food and drugs, lasted more than five hours. It veered from questions about how universities and public schools should handle reopening — each school or district should make its own assessment based on the severity of its outbreak, Dr. Fauci testified — to the mysterious cancellation of a $3 million research grant for a group that was studying the coronavirus in bats in Wuhan, China, where the outbreak originated.

“It was canceled because the N.I.H. was told to cancel it,” Dr. Fauci said, referring to the National Institutes of Health, without further elaboration. “I don’t know the reason, but we were told to cancel it.”

Political posturing abounded, as lawmakers of both parties tried to prod the witnesses and especially Dr. Fauci — the only witness who is not a political appointee of the president’s — into making a remark that might help or hurt Mr. Trump. After mass protests for racial justice that have drawn huge crowds and a campaign rally that Mr. Trump held in Tulsa, Okla., last weekend despite public health warnings, he gently suggested that Americans needed to do a better job of taking precautions to reduce the virus’s spread.

Shortly before the hearing began, Mr. Trump used Twitter to complain that he was not getting credit for his response to the virus, noting that Dr. Fauci, “who is with us in all ways,” has “a very high 72% Approval rating” — much higher than the president’s, which stands around 41 percent.

In somber tones, all four of the doctors testifying on Tuesday made clear that the United States was hardly out of danger. Despite talk of a so-called second wave of the pandemic, Dr. Fauci said the nation was still in the middle of the first wave. Dr. Redfield said the crisis had “brought this nation to its knees,” cautioning that when it coincides with flu season this year, hospitals and health workers would face a tremendous strain. Getting a flu shot, he said, would be imperative.

“This single act will save lives,” Dr. Redfield said.

Much of the talk during the House hearing was about testing. All four doctors contradicted the president’s claim at his rally in Tulsa that he had asked “my people” to “slow the testing down” because increased screening was revealing more infections, making the country look bad. Each said he knew of no such request.

“We are proceeding in just the opposite — we want to do more testing and of higher quality,” said Admiral Giroir, who has been designated the “testing czar” by the president. “The only way that we will be able to understand who has the disease, who is infected, and can pass it, and to do appropriate contact tracing is to test appropriately, smartly — and as many people as we can.”

Dr. Hahn pushed back against the suggestion by Democrats that the White House had pressured the Food and Drug Administration in its handling of the malaria drug hydroxychloroquine, which Mr. Trump has promoted as a treatment.

“I can tell you that I have not felt political pressure, nor has the F.D.A., to make any decision in any specific direction,” Dr. Hahn said.

The officials and lawmakers also repeatedly returned to the question of test positivity rates, an indicator that reveals the severity of outbreaks more than a tally of positive tests.

Mr. Trump and Vice President Mike Pence have both promoted an increase in testing as a reason for the rising numbers around the country, but Dr. Fauci at one point on Tuesday said it was more complicated than that. Referring to recent increasing in positivity rates in North Carolina and Arizona, he said that they were a clear indication of “additional infections that are responsible for those increases.”

And both Dr. Fauci and Dr. Redfield expressed concern about Mr. Trump’s decision late last month to withdraw from the World Health Organization, saying that they had maintained longstanding relationships with the W.H.O. even as the White House moved to punish it over its relationship with China.

Pressed by Congress to develop a plan to address the disproportionate effect of the virus on racial minorities, the administration announced it had created an initiative to do so. Admiral Giroir said that the Department of Health and Human Services had started a $40 million initiative at Morehouse School of Medicine, a historically black college in Atlanta, to educate Americans in underserved communities — including Native American tribes — about the coronavirus threat so that they could have better access to testing and treatment.

For the most part, the hearing was calm and polite. But Dr. Fauci grew testy when Representative David B. McKinley, Republican of West Virginia, asked him if he thought the news media had treated Mr. Trump unfairly — Dr. Fauci declined to answer — and whether he regretted not advising people more forcefully to wear masks earlier in the pandemic.

“There is more than a yes or no, by the tone of your question,” Dr. Fauci shot back. “I do not regret that. Let me explain to you what happened. At that time, there was a paucity of equipment that our health care providers needed who put themselves daily in harm’s way of taking care of people who are ill.”

Dr. Fauci himself brought two masks to the hearing, a black one that he wore for the first few hours and a red one emblazoned with logos of the Washington Nationals baseball team, of which he told the panel he was “an avid fan.”

Questioned about Mr. Trump’s refusal to wear a mask, Dr. Fauci did not directly criticize the president, but he delivered a veiled rebuke, telling lawmakers that it was important for public officials like him to wear face masks, “not only because I want to protect others and to protect myself, but also to set an example.”